Spin - for Symphony Orchestra and live electronics by K. Wołek 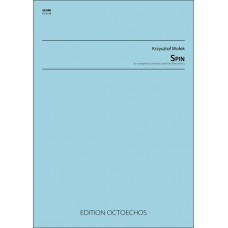 In Spin for symphony orchestra and live electronics the orchestra is connected to the surrounding auditorium by a system of speakers placed above the stage and around the audience. The title refers to the sound of the orchestra moving around the listeners as well as to the Polish word ‘spięcie’ which means ‘short circuit’ but also can be defined as ‘to pin together’.     The sounds of electricity, electric hums, short circuits and electrical wires are used in a  structural way in this piece, becoming the basis for various aspects of musical structure, such as the  harmonic language or orchestration. They are also a clearly recognizable source of the electronic part, which was created using recorded samples,  live electronic transformations of the sound of the orchestra and various sound synthesis processes.     The performance software was created by the composer in collaboration with Damiano Meacci and Francesco Canaveses of Tempo Reale (Firenze) and the University of Louisville Computer Music Studio. The piece was commissioned by Festival of Premieres in Katowice with the Polish National Radio Symphony Orchestra and was realized with funding from the ‘Composing Commissions’ program of the Polish Ministry of Culture and National Heritage.