Various Forms of Friction - for Cello and Large Ensemble by K. Wołek 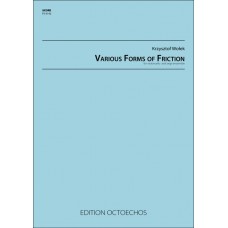 Various Forms of Friction was inspired by the idea that the process of art creation requires friction, both on a conceptual level as well as a personal level. Friction is also the primary means of creating sound on cello. The piece was composed between 2012 and 2016 for cellist Jakob Kullberg and exists in two versions for cello and symphony orchestra and cello and large ensemble.